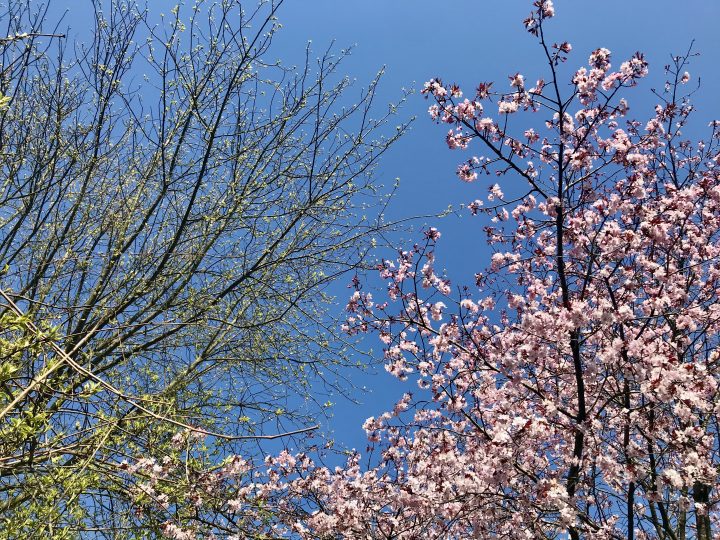 It’s not noisy where I live. Or I didn’t think it was, until the noise stopped.

I live in a quiet residential neighbourhood in Utrecht. Like most built-up areas of the Netherlands, it’s densely built from a North American perspective. All the streets are lined with three-story brick row houses, mostly built in the 1930s, and most of the roadways are by evening double lined with parked cars, often with one row half perched on the sidewalk. One-way streets are common and garbage trucks and delivery vehicles can struggle to clear corners or badly parked cars.

Not much happens here except living. There’s one street of shops and a community centre with a restaurant and there are four elementary schools and several daycares. It’s often called a village in the city. It’s a place for families, and in this neighbourhood they’re professional and blond. The parents go to their important jobs and they and their kids do sports and activities, field hockey, soccer, dance, music and judo. Most real estate ads for the houses here include the word rustige, which means quiet, calm, restful.

Most of the ads also point out that our neighbourhood is central and convenient. It’s less than 10 minutes cycling to the train station, less than 15 to the centre and close to the entrance to the highway. On either the highway or the train, we’re 30 minutes from the airport or Amsterdam and 40 minutes from The Hague or Rotterdam. It’s the perfect place, in the city but in a village, central but quiet.

But it turns out that the quietness was an illusion. It’s not until everything stopped that I noticed how loud it had been. All those cars and trains and planes, all those comings and goings, all of them gave a background noise that we never noticed. Those first few weeks were especially silent, a quiet place becoming still. Jobs that were important are now done at home, along with the formerly outsourced childcare and cleaning. There are still a few kid noises to be heard, and delivery vans wending through the streets, but behind that is an absence of noise, set against a brilliant blue sky.

With the physical silence also came the silence of the agenda. Of course, there is still work, there are still calls and we have the extra stress of guiding our children’s schoolwork. But all the activities are gone, for all of us. All the kids’ sports, the work meetings, the networking gatherings, the social events, in short all the stress of getting somewhere on time, of getting somewhere at all. All gone.

Both of these silences felt like letting go of breath I wasn’t aware of holding, of relaxing when I didn’t know I was tense. They gave mental space as well, space that apparently was used to unobtrusively keep track of the noise. And at first, it was only a relief, and we jumped into enjoying what we’d always liked the best, hanging out and playing games.

Eventually, though, the silence went too far and it became too easy to get mired in it, lost for direction without any noise and with everything uncertain. We had at once no pressure and too much pressure and it affected our family and drove us all into our own separate silent silos. I went to bed later and woke up later and hoped for the day to end so I could have a glass of wine and go to sleep again. I got the things done that were due, no more, and everything felt fuzzy and far away. My husband worked and worked, hoping to fend off the coming recession that could prove deadly to a family of entrepreneurs. But in doing so, he lost contact with the family that was all around him. We both left our children to their own work. My daughter, a precocious and social 10 year old, grew profoundly bored and completely demotivated and avoided the school work she normally loves. She retreated into books and precious screen time, finding ways to get more, legally and illegally. My 12-year-old son, stressed already from meeting the high expectations of his high school without the structure his ADHD brain needs, retreated into the unreal world of YouTube while creating his own fantasy world where his schoolwork was being done, until that illusion could no longer hold.

It took the breaking of that illusion to bring home to us the dangers of the silence going too far, the dangers of not creating our own direction and connection with the absence of what has always been imposed. How easy we had found it to let ourselves wallow, let the silence grow too deep, not dare to disturb it by checking to ensure that it wasn’t devouring the others. And now we need to find a new way of dealing with it, a way of helping each other to find a way in the unmarked landscape. And this just as the silence lessens a bit, at least for my daughter, back to school and friends half time, and the slow creep back to normal.

There are no right answers except the biggest one, which is the chance to choose how I live. It is also a lesson that can be expanded in scale, from our neighbourhood all the way up to our world. What do we like from this time? What did we not even know we were missing? What was terrible? What do we really want back? What are we done with entirely? Can we use this time to reflect on what our world should look like instead of moving along the path that seemed inevitable? Can we keep these lovely blue skies and the overwhelming care for others that the majority have shown? Is it possible to come out of this better than we went in?

So, I hope that as the world starts to get noisy again that I, and we, can hold on to the lessons of the silence and that we can shape our lives to our liking. At the very least, we should finally be aware of the noise.